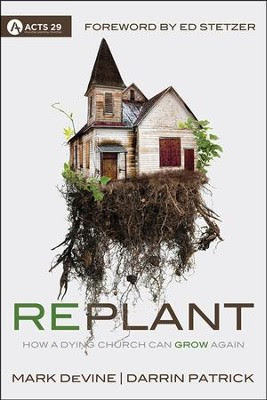 Replant is an easy read. It is a true story, a story told simply and compellingly, a story that at some level many pastors would like to be their own.  It is the story of an old historic church with a beautiful building in downtown Kansas City.  As often happens to old historic downtown churches, this one journeyed all the way to the fringes of extinction.  When Mark DeVine became interim pastor it was dying under the weight of its glorious past. His first challenge was surviving. Previous pastors had been squeezed out by less than enjoyable processes. He describes how he discovered and conquered the shadowy clique ("the cartel") that was running the church behind the scenes.  But then he came up with the idea that the church, to move into its future, needed to give up its autonomy as a church and become a satellite church of Darrin Patrick's Journey Church in St. Louis.  The church did, and it worked.  They now have their own pastors and are bursting with people and activity.

A few things rub me the wrong way about this story:


Having shared my concerns, though, I will say that I am grateful to the Lord for using Pastors DeVine and Patrick to bring fresh life and hope to this church, and pray that it will remain a faithful gospel-preaching beacon for many years to come.
Posted by Daniel at 4:48 PM