This hymn is one of my family's favorites to sing together.
Posted by Daniel at 8:50 PM No comments: Links to this post

Email ThisBlogThis!Share to TwitterShare to FacebookShare to Pinterest
Labels: worship

Will your son say this about you?

An email I received on Sunday from one of my customers:

Thank you for all your prayers for my Dad, Johnnie, and our family.

It was in the early hours of Tuesday morning that we received the call that my Dad had a stroke and was in the emergency room at Mayo Clinic. Since that time we have been on a roller coaster of emotional and physical stress. Days seemed like hours and one night lasted for what seemed like an eternity.
In every thing and at every step along the way, we were reminded of Gods' love for us and His promises to us as believers. Promises that He will never leave us or forsake us, that He clothes the lillies of the field better than Solomon ever looked in his finest clothes and that He sees the sparrow fall and has a much greater care for our welfare, All of these promises He has proven to be true specifically to us in this unexpected loss in our lives.
[My wife] and I have been, and continue to be, surrounded by a peace that passes human understanding. The death of my Dad leaves a hole in this life that will be impossible to fill or avoid. But God, is our refuge and our strength, though lonely, we are never alone. While we experience this loss, we are/were never lost or at loose ends. I can state with certainty that GOD is in control of everything that we as believers experience, whether is is walking through the valley of the shadow of death or having a lifelong security ripped away with no notice. It has been humbling to realize that I (and everyone in our family) has been protected from the "what if" and "where are they now" questions that must assault the non-believer when death makes a stop at their house.
As I take this time to remember my Dad, I am most grateful for him raising us kids to know and love God and what salvation through Jesus really encompasses. While he was not perfect (none of us are) he did present a really good example of how to love The Lord and to diligently seek HIM. Dad's efforts paid off, because during this last week of saying goodbye, it was surprising to find that we could sing to him. We sang songs of comfort and assurance from our childhood and while he couldn't join in, we certainly remembered him in church these songs. He was the loudest voice in church singing with both hands held high. Guess I know what he's doing right now!!!
Thanks again for your prayers and support,
John
PS: Please continue to pray for our family and feel free to forward this to anyone who may be encouraged
Posted by Daniel at 11:42 AM No comments: Links to this post

Are you sure you want God to talk with you?

A friend of ours, Jim Guerrieri, got tested recently.  We know him well and I can assure you he didn't make this story up.  He's a yard maintenance guy, not a TV evangelist.

Jim's alternator went out (thankfully, when his car was parked in his driveway).  But the timing was worrisome: he was supposed to drive the car to California in two days.  He called O'Reilly's and they said they had one in stock.  He went to O'Reilly's and even though the computer said they had one, they couldn't find it.  They spent like 25 minutes looking for it.  That's when the uncomfortable voice started talking.  "Tell them that I will show you where to find it, and then I will."

"If you don't, you won't be able to go to California."  (In a small town like ours, finding another alternator in 2 days might well have been difficult.)

So finally Jim decided to give it a go.  "You'll probably think I'm crazy, but I believe that God will show me where it's at if you'll let me come behind the counter."

The clerk was only too happy. "I don't care who helps you, I need all the help I can get!"

Jim went behind the counter, and promptly felt guided to go down a particular aisle and look on a particular shelf.  He grabbed the box with the alternator and handed it to the astonished clerk.

The manager said he had never seen anything like that in his life, and gave Jim $20 off.
Posted by Daniel at 12:12 PM No comments: Links to this post

Email ThisBlogThis!Share to TwitterShare to FacebookShare to Pinterest
Labels: miracle

Book Review: What Every Christian Needs to Know about the Qur'an

James R. White is no stranger to complex, controversial subjects.  He has focused his efforts on subjects that are not small; on subjects that really are important.  His books The Forgotten Trinity (about why the doctrine of the Trinity is biblical and essential to the Christian faith), The King James Only Controversy (why the elaborate and compelling arguments of King James Only-ism are ultimately false), and The Potter's Freedom (an excellent treatment of the Calvinism-Arminianism debate) have been helpful to me and I recommend all of them. Dr. White has a knack for taking very complicated subjects and explaining both sides of the argument in thorough, clear ways.  He has also written books on Catholicism and Mormonism that I have not read. 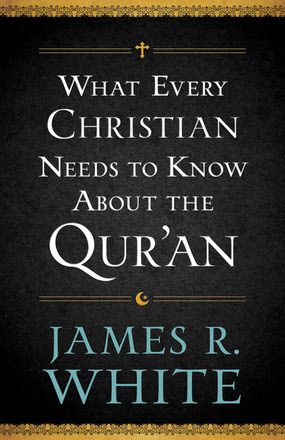 Now his latest book, What Every Christian Needs to Know about the Qur'an, takes on the teachings of Islam's holy book.  Like White's other books, this book is comprehensive, addressing all of the normal questions a person might have about the Qur'an. But to me, at least, it felt more complicated.  Perhaps it is because the Qur'an itself is at times very hard to understand, and Dr. White quotes extensively from the Qur'an.  Also, the Qur'an is a much bigger topic to discuss than trinitarianism, Bible versions, or Calvinism.  Each chapter in this book could have been turned into an entire book.  So some of the content of this book went over my head.  If this is what "every Christian needs to know", I would hate to see "what every pastor needs to know"!

The book is scholarly and fair; he does not insult or misrepresent Muslims.  He seeks to understand and explain the beliefs of mainstream Muslims, and then demonstrate how their logic is faulty.  There are truly so many holes in the Qur'an that it is sad that so many people have been so deceived by it for so long.  Now, during the Muslim month of fasting, is a great time to spend extra time praying for Jesus to open the eyes of Muslims to the truth.

If you'd like more information, Thabiti Anyabwile has posted a very helpful interview with Dr. White about the book.

I received a free copy from Bethany House Publishers in exchange for an unbiased review.
Posted by Daniel at 12:16 PM No comments: Links to this post

How to Be Good and Rich

Last Sunday I had the chance to preach again in my home church, and I preached on Paul's instructions to the rich in 1 Timothy 6:17-19.  Here's an excerpt, actually a quote from another person:


Every condition of life hath its peculiar dangers to be avoided and duties to be done, but none hath dangers more threatening or duties more important than that of the rich and great: whose situation, notwithstanding, is seldom considered by those who are in it as having anything to be feared; and is generally imagined by others to comprehend almost everything that is to be wished. To be thus environed with temptations, and probably sensible of none of them, is a most pitiable condition. {T. Seeker}


You can listen, watch, or read the sermon here.

Posted by Daniel at 4:58 PM No comments: Links to this post

Why are you here?

I had the opportunity to preach in my own church two Sundays ago, and that's the question I started with. I concluded with these words:

You can watch, hear, or read the sermon here.

Posted by Daniel at 4:58 PM No comments: Links to this post