We need to pray for Robert Park. A professing Christian, the twenty-eight year old Korean-American from Arizona crossed the Tumen River into North Korea on Christmas Eve. Unlike other Christians seeking to aid the people of North Korea, who usually are as covert as possible, Robert Park deliberately announced his crossing to North Korean border guards. He shouted in Korean, "I am an American citizen. I brought God's love." He bore with him a letter to Kim Jong Il, asking the tyrant to open his borders and end his concentration camps.

He was promptly arrested.

Far from the impulsive gesture of a starry-eyed idealist, Park's move is actually a well-calculated, incredibly brave gamble. He is creating a lose-lose situation for the North Korean leader (similar, on a much larger scale, to Cindy Sheehan's campout at President Bush's ranch). If the North Koreans execute an unarmed man who did not seek to hide his entry, they look bad. If they release him, he will not leave, and if they deport him, he will probably return.

Legend says that hundreds of years of bloodsport in the Roman coliseum were ended by Telemachus, who was so horrified by the practice that he ran into the middle of the arena crying, "In God's name, forbear!" and was promptly killed.

Robert Park has reminded us that the most powerful people in the world are the people who are not afraid to die. Let's pray that God uses his life to inspire more Christians to noble sacrifices, and to bring freedom to the people of North Korea.

Thank you, Kyle, for telling me about this story.
Posted by Daniel at 3:01 PM No comments: Links to this post

John G. Paton: A Love for the Heathen

My pastor delivers consistently good sermons. But his message on December 13th about the life of pioneer missionary John G. Paton brought tears to my eyes. If you don't see the player below, you can click here to listen.

Posted by Daniel at 1:35 PM No comments: Links to this post

It is better to live without Internet than to fall into pornography. I use and recommend BSecure. It is a fantastic filter and costs only $50 a year for up to 3 computers. (I don't like McAfee, so I use only BSecure's Internet Filter, not the complete Security Suite.) It's highly customizable, with multiple layers of protection from pornography. And yet it doesn't get in your way or slow down your page loads. And by the way, I'm not getting any brownie points from BSecure for advertising their service. (Well, not that I know of anyways. Maybe someone there will read this and give me a free month of service?)
Posted by Daniel at 1:25 PM No comments: Links to this post

For you know the grace of the Lord Jesus Christ, that though He was rich, yet for your sake He became poor, that you through His poverty might become rich. -- 2 Corinthians 8:9 (NASB)

This verse is a beautiful summary of the incarnation. Two brief comments on it:
Now I want to take these two points and apply them to us. Jesus incarnated into one Bethlehem. Today, thousands of Bethlehems still wait for an incarnation of Jesus. We who follow Jesus are His body, His representatives on earth. Do you know how many people have never personally met a true Christian?
"For our gospel did not come to you in word only, but also in power, and in the Holy Spirit, and with full conviction; just as you know what kind of men we proved to be among you for your sake." -- 1 Thessalonians 1:5 (NASB)

Email ThisBlogThis!Share to TwitterShare to FacebookShare to Pinterest
Labels: evangelism

This year my parents and I discovered this touching story called A Quiet Chamber Kept for Thee by Walter Wangerin Jr. Take a few minutes to read and be blessed by it!
Posted by Daniel at 1:29 PM No comments: Links to this post

Last Thursday I saw an article in the local paper announcing the grand opening for a 39-foot statue called Mago, the Korean name for Mother Earth. The statue was erected by a Korean organization called the Tao Fellowship. The statue has drawn flak from local residents who feel that it is an eyesore. (It is close to a main highway.) In fact, the City Council will be meeting next Monday to decide whether the statue can stay.

The grand opening was today. My pastor (Jim Masters) and I decided to go to the event with the goal of telling some of the people there about Jesus.

We met at church shortly before 10 AM. Jim read 2 Corinthians 4:1-6, which seemed especially appropriate, and then we prayed. We drove to the Mago Earth Park. Bowing, smiling, white-gloved attendants pointed us to a parking spot. Many of the workers were from Korea, and some of them did not speak much English. They were all very excited and cheerful though. Surprisingly, many of the workers were college age. We went to a big tent, and there were many people inside. The ceremony was just starting. To our surprise, when the emcee asked for shows of hands, roughly 1/4 of the audience was from Korea and 1/3 was from Japan. This picture does a poor job of showing the size of the crowd. (You can click on any of my pictures to see them bigger.) 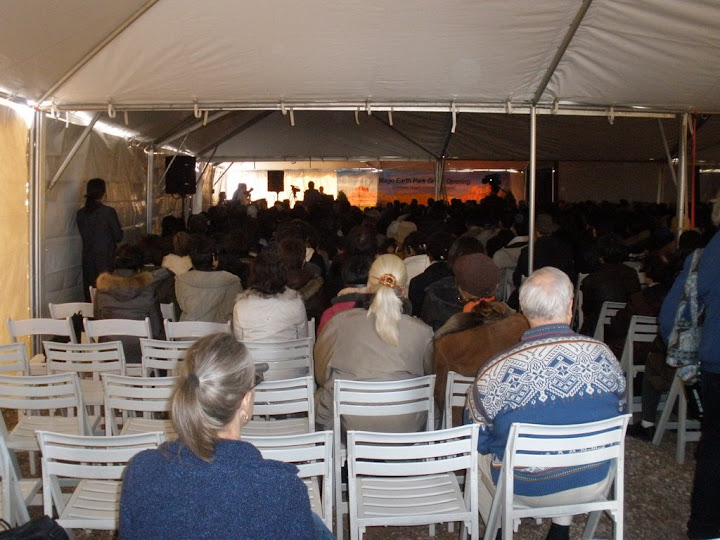 I had never before seen so many people so openly worshipping a false god. This was not subtle religion, this was very public. Knowing that we could not talk to people about Jesus while they were watching the events in the tent, Jim and I walked around the 6 acre park. 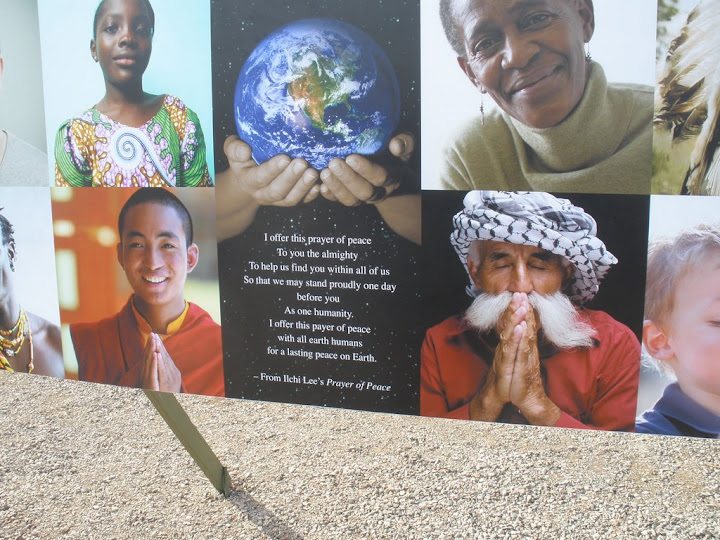 We walked over to the idol. It was huge, standing roughly 49 feet high (there was a 10 foot base). You can see how small I look next to it. I am holding up my pocket Bible, which tells of the day when Mago and all her followers will bow their knees and acknowledge that Jesus Christ is Lord. But it takes faith to say that. The statue feels very imposing. I can't imagine how much pressure Shadrach, Meshach, and Abednego must have felt when everyone else around them was bowing down to a statue of Nebuchadnezzar twice the size of Mago. 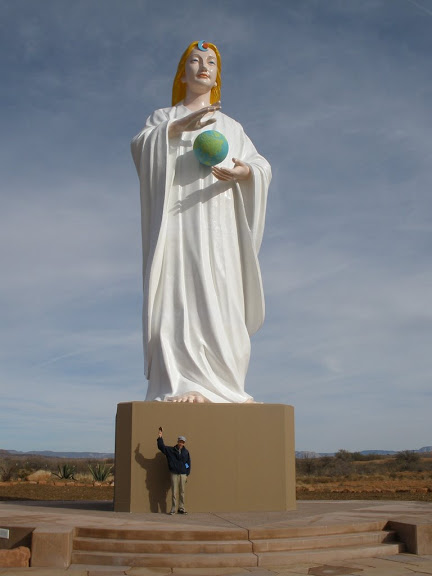 In three hours, God blessed us with about 10 good, in depth conversations with individuals. I learned a lot by listening to how Jim shared the good news with people. For some conversations we were together; others, we did separately. It was very easy to bring up the subject of spirituality and religion, as you can imagine. We found that a surprising number of the people we met were from Catholic backgrounds. In the past, I have gotten the creeps or confused when trying to share Jesus with New Age people. This time, probably due to my friends and parents who were praying for me, I felt relaxed and coherent. It was sad to see so many people trying to tap into a source of divine goodness in themselves (where they will never find it) but a joy to tell them it could be found in Jesus alone.

Here is another part of the park, where they have smaller statues of 7 religious figures. 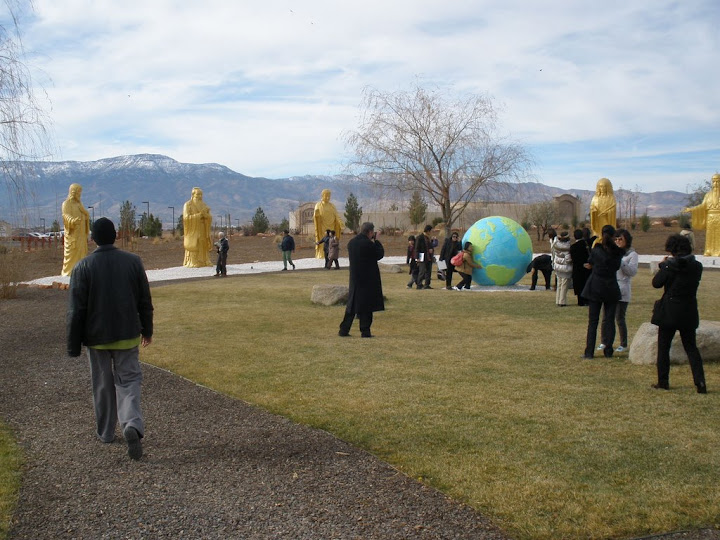 As far as I know, we were the only Christians there. 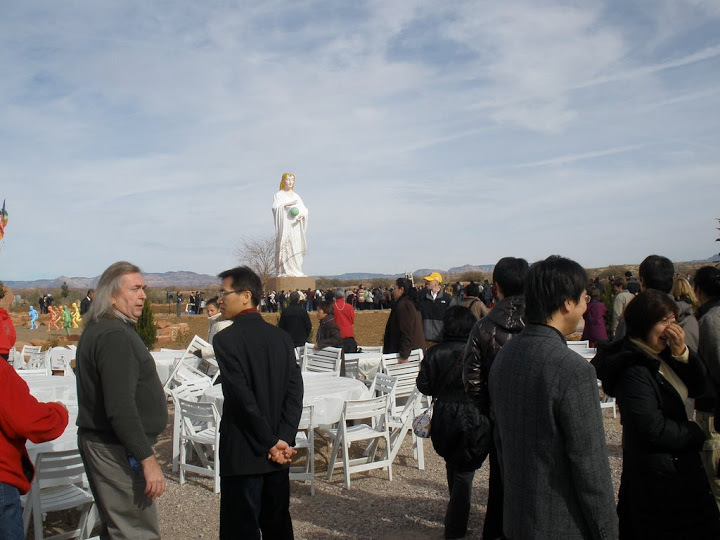 I've posted a few more pictures on my photo album.

Some local Christians have been upset about the statue's presence. I can understand their concern, but after today, I hope the statue stays. It is like a magnet attracting lost people. They are relaxed and open to talking about spiritual things. An ideal place to share Jesus! For that reason, I've nicknamed the place "Mago Evangelism Park".

Jesus, thank You for saving me. If it were not for your grace, I too would still be worshiping idols. Bless the people we talked with today. May they turn from their sins and put their trust in Jesus alone to save them from Your wrath. Help me to love them like You do. Send more Christians to share Jesus with them. Amen!
Posted by Daniel at 7:07 PM 3 comments: Links to this post

You Don't Need TV to be Well-Informed

Many people who acknowledge TV's dangers as a time waster and mind polluter nevertheless fear that without TV, they will not stay informed about world events.

A few questions to ponder as we ponder this issue for ourselves:
Understand, I'm not saying watching TV itself is a sin. TV is simply a communication tool. The question is what messages is it giving us?

And, apparently TV does not actually work to keep Americans apprised of current events. Pew Research is currently running an online poll, measuring knowledge of current events. Despite the fact that I have not watched TV in years, I scored higher than 93% of other poll-takers. I don't say this to brag (I think many of you will score equally well, if not better), but simply to demonstrate that TV consumption is not necessary to be well-informed. When you see how easy some of the questions are, you too will question how well TV works as an educational tool!

Thanks for sending the link to the poll, Doug! :)
Posted by Daniel at 6:53 PM No comments: Links to this post 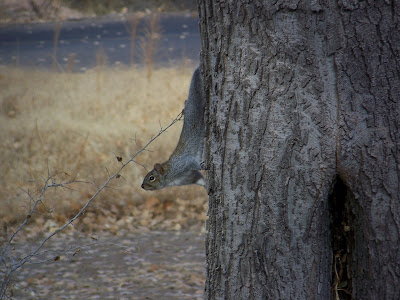 I'm not much of a photographer, but this little fellow came out really good! (Thanks again, Aunt Linda, for a camera with such a good zoom.)

Posted by Daniel at 11:59 AM No comments: Links to this post

Thanking God for a Multigenerational Church 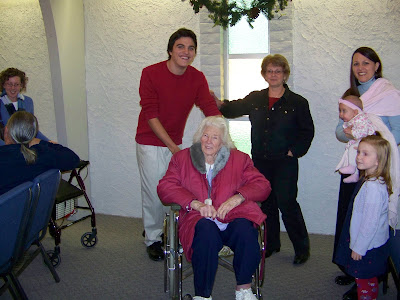 We're blessed to be in a church that has bucked the modern trend towards separating people into groups by season of life. I'm glad I had my camera handy yesterday as Michael was pushing Agnes in her wheelchair. If I'd been faster, you would have gotten to see the little girl at right (and her younger brother, who scampered off camera) giving Agnes a hug.
Posted by Daniel at 11:21 AM No comments: Links to this post