A Cross That Could Not Save

A few weeks ago, I stood in Thailand looking across a small river.  Myanmar (Burma) was on the other side.

Vendors on my side stood under their portable canopies and attempted to sell raw meat in the 90 degree heat.  A disheveled woman sat on the sidewalk and nursed her baby openly.  Stray dogs (some with sores) wandered lazily.  A few beggars (including children) tried to catch anyone's attention.  Four young children, unaccompanied by adults, happily played a local version of "Duck, Duck, Goose".   Another woman rode by on a bicycle, her face black and blue.

Myanmar, on the other side, looked no less grimy.  Impoverished people come from Myanmar to Thailand for work - and not the other way around.  My friends and I stood looking into Myanmar, and prayed. 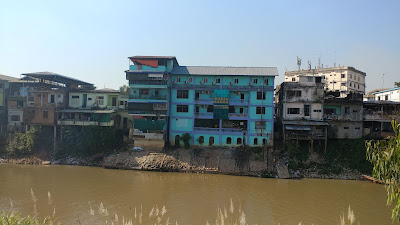 "There's a man over there carrying a cross!" one of my friends exclaimed.  We looked.  Sure enough!  It was a cross... or something like a cross?  Maybe about three feet tall.  The top part was short, a bit out of proportion for a cross.  Both poles were covered in some kind of cloth.  The man and a friend walked down the riverbank to the water on the Myanmar side.

Joseph, born in Myanmar, told us, "I think it's some kind of fishing tool."

The men put the "cross" into the water and it started floating downstream.  Then the men started walking back up the hillside.

"Oh," Joseph corrected himself.  "It's not a fishing tool.  They put their sins on it and are trying to send their sins away."

Apparently this is a common Buddhist practice.  Transfer your sins to something that floats, take it to the river, and send it away.  These men happened to pick something in the shape of a cross, not knowing that there was another cross that really could take away their sins.

When I told this story to a friend the next day, he told me, "This Buddhist custom can be used as an evangelism bridge.  You can tell a Buddhist that the idea is good, but there are four problems.  The person bringing the float is dirty, the river is dirty, the float has no value, and there is no one to receive the float.  Then you can show how the gospel answers all four problems."

Are you trusting in the cross that can save?  If so, will you go to the people who are trusting in crosses that cannot save, and tell them about Christ?
Posted by Daniel at 7:18 PM No comments: Links to this post