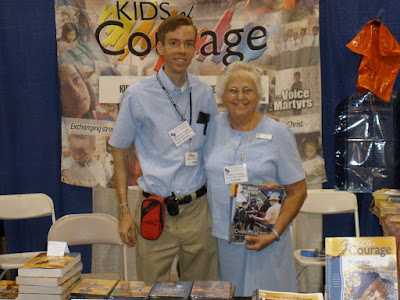 "This woman was abounding with deeds of kindness and charity, which she continually did."  Acts 9:36.

My friend Lu went to be with the Lord recently.  You need to meet her.

I met Lu because we both served on a team of volunteer representatives for the Voice of the Martyrs from 2006 to 2012.  Lu was not the most gifted of my teammates, or the strongest.  Besides the normal wear and tear of 70+ years of living, she had more serious health conditions including hepatitis C. But because of her incredible drive, she accomplished more than any of the rest of us.

When VOM announced that they wanted to find churches willing to host regional conferences around the country, only one of my team decided to take up the challenge: Lu.   She organized a VOM conference at her church in Flagstaff, Arizona (not a metropolis), and 500 people from as far away as Wisconsin showed up.  Lu had intestinal surgery just days before the conference but still was there in person to make sure everything ran smoothy (and it did).  She had things organized down to how many cookies each volunteer needed to bake.

When a church in Southern Arizona asked for a VOM rep to come speak, none of the nearer reps (including myself) could find time.  But Lu drove 5 hours each way, spoke, and so connected with the people that one of them became a rep himself.

The woman seemed to have only two speeds: gallop and collapse.  When she did collapse, she rebounded quickly, often within hours.

Some hard workers are stoic or sour.  Not Lu.  She often signed her letters, "Joyfully, Lu".  And joy exuded from her pores.  She loved whatever she did.

Over the years we were together in the same car for at least 5000 miles, not to mention all the hours outside of the car.  We faced all kinds of situations.  Lu reacted to unexpected challenges and opportunities better than many people half her age.  I never saw her afraid.  She had an indomitable confidence in the goodness and sovereignty of God.

I worked with Lu toward the conclusion of her life, a life filled with service to Christ.  Lu and her husband Dick met at Bible college and Dick planned to become a pastor.  But not long after their marriage, meningitis permanently shattered Dick's emotional capacities.  Lu, the "weaker vessel", had to become the strong one in their marriage.  She did this with unusual grace, helping Dick to use his remaining abilities to their fullest.  She was strong in a way that made the men around her better leaders, not weaker.  They went on together to serve support roles in a variety of ministries, including Wycliffe, where they became friends with founder Cam Townsend and went through the jungle training camp in Mexico.

I don't even remember all of the things she did.  She hosted tea parties for girls.  She smuggled Bibles into China.  She loved to pray, and was with me in the most powerful prayer meeting I have ever seen.  She gave her wedding dress to a girl in Pakistan.  She was what a normal Christian is supposed to look like.


All of these feats were fueled by a deep, daily love relationship with Jesus.  These were not the works of a woman seeking glory from man or merit from God.  She knew that she did not deserve Christ's love or forgiveness, and it bubbled out of her in everything she did.

A few days ago I discovered the following videos.

In the first, TV preacher Kenneth Copeland takes possession of a new jet for his ministry.  (They still are trying to raise another $2.5 million for upgrades.)

The second video shows Copeland and another preacher (who also has a jet) discussing why they "need" a jet for their ministries.

The videos are sickening, but I don't share them here to bash prosperity preachers.  Hopefully you are discerning enough to already know that these men are preaching a false gospel.  Rather, I share these videos in order to ask whether we ourselves are guilty of using similar rationales in justifying luxury in our own lives, on a smaller scale.

As Christians, we claim to follow a Man who didn't even own a pillow, and to respect an apostle who wrote 1 Corinthians while hungry and homeless.  I am not advocating a vow of poverty or financial asceticism.  I'm suggesting that we re-examine our reasons for believing we need the things we buy.
Posted by Daniel at 1:43 PM No comments: Links to this post