A dear friend read something I wrote, in which I mentioned evangelizing a Catholic. He wrote back:


Are you saying that Catholics are not Christians? The word catholic means universal as explained in the Nicene Creed.

I realized my reply to him might be of interest to others too.  Here it is.

Sorry for the delay getting back to you. Thanks for asking for clarification about this. You’re absolutely right that catholic is a great word and every Christian should consider himself a catholic in the sense of being part of the one universal church (all Christians from all places and all times of history). 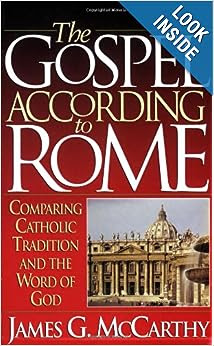 I was referring to the Roman Catholic Church. Based on my understanding of Scripture and of the teachings of the RCC, the RCC still (even post-Vatican II) teaches a gospel that is, at its core, contrary to the Biblical gospel. The core issues still remain that caused them to excommunicate Martin Luther and led to the Protestant Reformation. (Interestingly, today is the anniversary of the day in 1517 when he nailed the 95 theses to the door of the church in Wittenburg.) So while I’m sure there are individual RCC members who are Christians, I would say that the RCC as an institution is not Christian in the Biblical sense. Thus, when I have opportunity to talk about Jesus with people from an RCC background, I try to find out their understanding of the gospel. (A book that I found very helpful is The Gospel According to Rome by James G McCarthy. It is written by a former RCC member himself, he avoids exaggerating the RCC positions and writes with compassion, not anger or pride.)

But I should have said in my note that many Baptists I run into are not truly Christian either. Many Baptist churches proclaim an emasculated gospel that basically tells people to pray a prayer and then assures them they are now Christians. (And I say that as someone who has spent the last ~10 years as a member of Baptist churches.) No matter what our particular “stripe”, we seem to all naturally gravitate away from the teachings of the Bible to the teachings of men. We want a formula, and God refuses to be reduced to a formula!

I would also add that we seem to all naturally gravitate toward forms of religion that flatter our pride.
Posted by Daniel at 3:30 AM 2 comments: Links to this post

Should Movies Be Used to Change Worldviews?

No one will argue that wordless art can convey powerful messages.  Think, for example, of Pomp and Circumstance, or Da Vinci's The Last Supper.  How much more powerful then are movies, combining the power of story, music, and (an ever changing) "painting"!  The Hollywood elite are very aware of the power they possess to shape culture, and they wield it with skill.  They have actually created a system in which people pay them money to get brainwashed.

But should Christians use film to fight back?  Should Christian movies be produced to change worldviews?  God could have arranged things so that Jesus was born and lived and died in a time when there were video cameras.  Why did He choose to convey the story of Jesus in writing instead?

Here's why I am thinking about this.  A friend sent us a link to a good short movie, Crescendo.  I'll try not to spoil it for you, other than to say it is designed to change minds about the topic of abortion.  The movie is rather creepy (as a movie about abortion should be) so I don't recommend it for children.  But (if you're not a child) have a watch now, before you read further.  You might even want to watch it twice so you can catch the clever nuances of the opening conversation, which seems rather bewildering the first time through.
Now that you've watched it: how would your reaction to the movie have been different if the child had been named Adolf instead?  Do you see how the same medium (film) could have been used to produce an equally compelling argument in favor of abortion?

Which leads to my final question.  I have an answer in mind, but I want to hear your thoughts first.  Since non-Christians can use film with power to "convert" people to their worldview, is it a waste of our energy and money to use film to try to convert people to ours?  Should we exclusively use other means of proclamation that non-Christians are unable to duplicate?
Posted by Daniel at 7:21 PM No comments: Links to this post

As the number of Muslims increases in America, Christians are realizing that we should reach them with friendship rather than avoid them in fear.  Wheaton College has just released Journey to Jesus, a 6-session DVD curriculum about building Christ-centered relationships with Muslims.  Tyndale, the publisher, was kind enough to send me a free copy in exchange for an unbiased review.  See below for details on how one of you can get my copy for free!


First I'll tell you about the curriculum, then I'll give you my analysis of its strengths and weaknesses.

The curriculum is contained in two DVDs.  (It seems that everything would have fit on one DVD, so I'm not sure why they split it onto two.)  The six sessions are comprised of a dramatic video (short movie), a teaching video (like watching PowerPoint with a person's voice), and printable (PDF) teacher guides, student handouts, and bonus explanatory materials.  Sessions one and two center around a young American Christian mother who befriends a shy young Egyptian Muslim mother who has just moved into her neighborhood.  Sessions three and four introduce us to an American Christian man who converses with an intelligent but nominal Muslim East Indian coworker.  The final two sessions depict a young Christian engaging a young, very argumentative (American?) Muslim as part of a college assignment to learn about each other's worldview.

How this curriculum could have been better:
Azim: The Christian idea of forgiveness, it seems far too easy to commit a wrong, ask for forgiveness, and make the same mistake again.

Larry: Everybody fails, nobody’s perfect. Which means we all need forgiveness.
Azim: I agree, but which is better: to ask for forgiveness or do something tangible to make up for our wrongs?
Larry: We can’t always make up for our wrongs.  This means that sometimes--
Azim: We do good deeds to outweigh the bad ones, thus the world becomes a better place.
Larry: I believe in good deeds too.
Azim: Oh, so we believe the same thing?
Larry: Well the Christian perspective is that good deeds is the humanly thing [sic] that we can do to bring the kingdom, as Jesus said, here to earth.  See in the New Testament it says that faith without deeds is dead.
In short: this curriculum is a good tool for introducing young Christians to the joy of sharing Jesus with Muslims.  But you will need to supplement the curriculum with outside information that explains the content of the gospel clearly and comprehensively.  (Thabiti Anyabwile's The Gospel for Muslims is a good option.)  Friendship evangelism is only good if evangelism actually takes place.

I will give my copy for free (including postage within the US) to whomever of you can use it most.  Send me an email [danielbartsch
Posted by Daniel at 10:14 AM No comments: Links to this post

At first I thought it sounded totally weird.  But after an evening seeing it firsthand, I'm impressed.

A church near my home, Beaver Creek Baptist Church, is observing the Feast of Tabernacles (aka Feast of Booths) this week.  Sort of.

Hopefully your theological alarm bells are already going off.   There are "Torah Observant Messianic Jews" who try to do things like that nowadays, and usually wind up losing the Messiah.  Then there was the heretical Worldwide Church of God (founded by Herbert Armstrong) that had as one of its tenets the keeping of Levitical feasts, including Tabernacles.

But BCBC is not doing this to obey the Old Testament (or the New Testament, for that matter).  It's clear that the Feast of Tabernacles is one of the shadows that was no longer necessary once the substance (Jesus) had come.  (Colossians 2:16-17).

Rather, they have extracted key benefits of the Feast of Tabernacles and imported them into the 21st century church.  What this looks like for them is this:

Tonight my parents and I went to the after-supper Bible reading.  It was very simple:
About thirty people were there, sat mostly on folding steel chairs, and listened remarkably attentively to over an hour of straight Bible.  Some followed along silently in their own Bibles or on their electronic devices.  The reading was mostly monotone and the readers stumbled over their words frequently.  But there was something strangely beautiful and compelling about this unprofessional, unadorned meeting.  The only attraction was the Word of God itself.

I hope more churches will experiment with this idea.
Posted by Daniel at 10:31 PM No comments: Links to this post

Abraham is highly respected by the world's three monotheistic religions.  The Bible calls him "the father of faith".  And Charles Swindoll is a seasoned Bible teacher and writer.  So I was sorry to find a couple major blemishes in Swindoll's new biography of the patriarch.

The biggest shock was how "gospel centered" this book is not.  Although Swindoll carefully covers everything from Genesis 12 to 24 as well as many New Testament references to Abraham, he manages to minimize the many parts of this story that point forward to Jesus and the cross.  A modern Jew would disagree with little in this book. 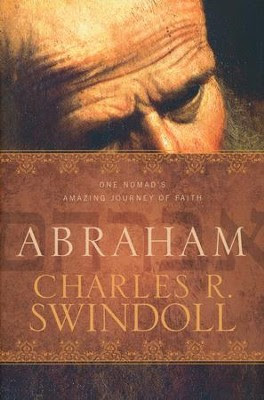 Swindoll writes with the assumption that his readers are Christians, and thus places the gospel message in the appendix.  But Christians need to be "evangelized" just as often as everyone else, and the gospel is not an appendage to the story of Abraham; it is the central message.

There is actually more law than gospel given in this book.  Swindoll's Abraham dwindles into a collection of good moral precepts and principles.  This is not bad: we do need to heed the Bible's moral precepts, and Swindoll delivers them.  He just does not explain much how we will find the power to keep them.

My other, smaller critique, is that Swindoll quotes A. W. Tozer's analogy that explains the way God's sovereignty and man's responsibility interrelate.  When you think about their analogy, though, it quickly breaks down (about like trying to explain the Trinity using an egg, or water).

Even given these problems, this book is still one that I recommend for several reasons:
Swindoll's book is flawed.  But so was Abraham.  And yet God chose to use him.  May He do so with this book as well.

I received this book for free from Tyndale in exchange for a review.  My review was not required to be positive.
Posted by Daniel at 12:01 PM No comments: Links to this post