Friday, June third, I got my first look at the new US headquarters building for The Voice of the Martyrs.  Although VOM has been headquartered in Bartlesville, Oklahoma for a number of years now, the ministry has undergone such rapid growth in the past few years that it was bursting the seams of its previous facility.  They actually had to divide up parts of the ministry among various buildings scattered across town.

Now they are located on a beautiful campus on the outskirts of town in facilities that give them room for even further expansion if God so guides.  If my memory is correct, VOM has invested about $35 million in the new facilities and property.  But they did so without ever cutting the amount spent on ministry each year, and only owe about $6.5 million which should be paid off in 3 years. 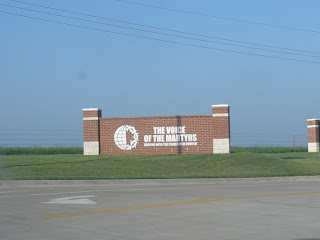 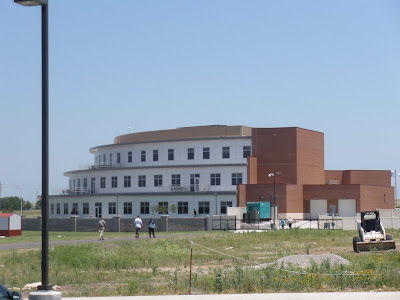 If you notice the office building above, the architecture should look vaguely familiar.  That's right; it was intentionally designed to remind people of the Roman Colosseum.  It's an odd dichotomy having a beautiful brand new office building in the shape of a place where terrible tortures were inflicted on people, including Christians.  I pray that those who enter this building will never forget the suffering and triumph our Christian forebears experienced in that Colosseum.

As we walked up to the building for our morning meetings, I stopped to get my first look the Martyr's Wall. 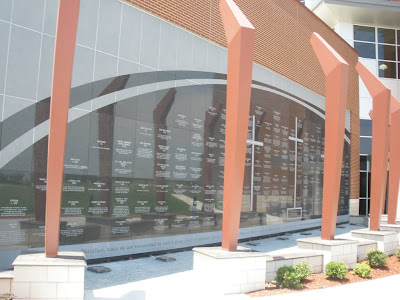 Something like a church equivalent of the Vietnam war memorial, the Martyr's Wall is a gorgeous marble wall on the outside of the building listing many people who have actually died for Jesus.  It tells the year of their death, a short synopsis of how they died, and their name.  Names are intermingled from all eras of church history, from the early church to modern times.  Spaces have been left blank to allow room for more.  Of course, only a small fraction of the hundreds of millions of Christian martyrs have been listed on this wall. 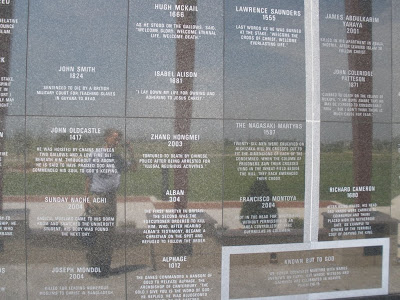 If you look carefully, you'll see that the marble is somewhat glossy and you can see a foggy reflection of my image in the wall.  I noticed this as I was taking the pictures.  It is sobering to see one's reflection in this wall.  But not morbid.  I think that every true Christian wants to honor Jesus not only with his life but also with his death, whether that means under the sword of a Muslim fundamentalist or under the scalpel of an American surgeon.  I felt sobered, but it was a joyful sobriety.

I had decided to give a bit of that sober joy to my fellow Area Coordinators.  After entering the building, I put on my orange jail jumpsuit and handcuffs.  I wear these sometimes when representing the Voice of the Martyrs.  It's fun to observe the reactions of people when they see what appears to be a jail escapee walk into their church.  This was my first time for a number of the other Area Coordinators to see my costume.

Well the morning meetings went fast, and I came away with one nugget that I put to immediate use.  After asking for help in time management as a VOM Area Coordinator, I learned that one key to time management is reducing distractions, and that one way to reduce distractions is turning off the email notifications on my computer.  Not only did I have the Pavlovian bell, but I also had two visual announcements popping up for every incoming email.  No more!

VOM provided lunch for us at Tumbleweeds, a local restaurant.  (I don't think they even know what tumbleweeds are in Oklahoma.  Come to Arizona and I'll show you some real tumbleweeds.)  I decided that gracing a public restaurant with my jailbird outfit would be stretching the limits of public propriety, so I took off my orange jumpsuit and attempted to take off the handcuffs.  That's when I realized I had a problem.  See, I have two pairs of handcuffs.  I had assumed that both of them used identical keys.  And wouldn't you know it, I had brought the key to the other pair.  But it wouldn't unlock it.  I was so thankful that this time I had only cuffed one hand, not both.  But still, the idea of having to wait three more days to get the cuff off my wrist was a bit frightening.  Although not tight, it was already beginning to hurt a bit.  Not to mention wondering what every gas station owner on the way back would think of the guy filling his vehicle with handcuffs dangling from one arm!  However, I realized that I would have 20 VOM friends to corroborate my story should anyone at Tumbleweeds give me trouble, so why let a little steel stand in the way of a good lunch?  I will add that I did tend to keep my left wrist behind my back or under my napkin for most of the meal.

I also realized that perhaps Jesus had allowed this key mixup to occur to help me identify more with the persecuted church.  (After all, that was supposedly my reason for wearing the outfit in the first place.  Duh!)  Although I am accustomed to being able to take the handcuffs off whenever I want, many Christians do not have that luxury.  They are "ambassadors in chains" like Paul.  So I figured that if I had to wear cuffs for 3 more days, that was still a lot shorter than the years that many of my brothers and sisters have been in bonds.

The rest of the day was spend with VOM people so I didn't have to worry about people seeing the cuffs.  Next up was Dave Brackemyre, the director of the Voice Ministries department at VOM giving a sample presentation to help the reps he supervises (such as me) ideas on how to improve.  I recorded the first part of his talk.


Dave did a great job.  Even though he has probably spoken about the persecuted church more than any of the rest of us, and even though his primary work now is administrative, and even though his personality at first seems very dry and dispassionate, he actually got choked up a time or two during his hour-long message.  I think it's beautiful that his heart is still moved by the sober joys of serving the suffering saints around the world.

Another good thing happened during his message.  I had time to examine my cuffs and the key more carefully.  Through close scrutiny I discovered that the key had gotten a small piece of lint from my pocket down in the hollow center which was preventing it from fully engaging in the cuff.  Using a tie-tack and a small screw driver from Bonnie's Swiss Army knife, I got the fuzz out and got the cuff off.  Freedom!

My roommate Kevin and I had an hour before our next event.  He wanted to visit a tack shop to buy a couple things for his wife, who is apparently quite the equestrienne.  I have no interest in horses but he had the wheels so off we went to Yocham's Custom Leather Saddlery.

It turned out that God had a purpose even in this seemingly random distraction.  After wandering around bored in the huge barn-like structure that was filled with an amazing assortment of horse supplies and home decor, but surprisingly empty of people, I sat down to watch the owner tapping away with his leather-working tools.  Leather working had been a hobby of mine during my childhood (I even still have my Tandy kit wallet to prove it!) so at least I knew something about what he was doing.
Then his wife hollered from another part of the store, "Are you guys with the Voice of the Martyrs?"  We happily confessed that we were.  Her husband then asked me, "Do you know Russell Stendal?"  It turns out that the intrepid Colombian missionary had been in their shop a few times himself to buy stuff for his own horses.  I listened with fascination to Mr. Yocham tell how Russell uses horses to reach certain remote areas of the Colombian jungle.  But then it was my turn to tantalize Mr. Yocham by asking if he'd heard that Russell was a hostage of the FARC for 5 months, or the unforgettable "pig story".  He hadn't.

So Kevin and I had a nice chat with our new friends (and Family members) the Yochams before heading out the door to our next adventure.

(But to finish the story of the Yochams, it just so happened that the next day Russell was speaking at VOM's conference, and I told him about our conversation with the Yochams.  He gave us a copy of his first book (Rescue the Captors) to give to them so that they could read the hostage and pig stories for themselves.)

Well, the next thing that Friday night was the prayer meeting.  I had been looking forward to this prayer meeting ever since the 2008 pre-conference prayer meeting.  There is just something special about getting that forty VOM representatives together in one place with one heart for one purpose.  This year we had only an hour.  And we wound up meeting in a warm, humid upper room in a church gymnasium with a choice of soggy couches and steel chairs.  But you know that a prayer meeting is good when I complain that we had to stop after an hour.  God guided: we stayed focused on kingdom-building, Jesus exalting praying; no one monopolized the praying; a few songs of praise were interspersed; our hearts were stirred and joined together despite the fact that many of us scarcely knew each other beforehand.

Do you wonder why over three hundred people give thousands of hours every year as volunteer speakers for the Voice of the Martyrs in the United States?  Why dozens of them traveled from all over the country to a little town in northeastern Oklahoma for this conference?

It is this.  This finding of Family in horse barns and stuffy gyms.  These are some of the sober joys that come in suffering for Jesus, and in serving those who do.

Email ThisBlogThis!Share to TwitterShare to FacebookShare to Pinterest
Labels: VOM