Of Photo Galleries and Parking Gears

On June second we pulled out of Amarillo.  We stopped at the cross in Groom, Texas. 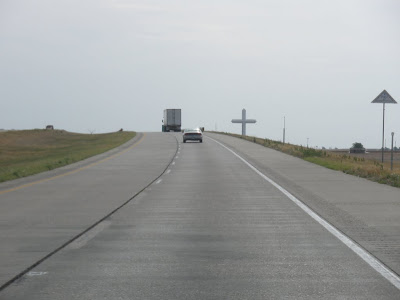 The wind was fierce, so we didn't stay long.  But they did have a new statue since my last visit.
And the visitor center is nearly finished now. 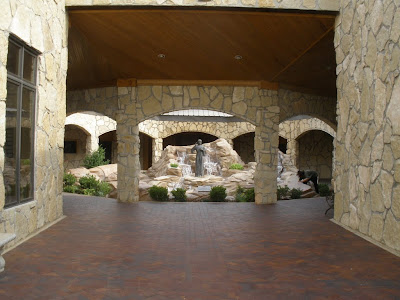 The Catholic theological bent is still prominent, sadly.  But still, it's a great place to meditate on Jesus' passion, and to talk to other visitors about Him.
After skirting Tulsa (and a wild time getting on highway 75 north, since the exit from I-244 was closed!), we were in the home stretch.  Here is a video clip of 2 minutes of our drive.  One thing that was a great blessing in our travel is that when we were talking with each other, often our conversation was about Jesus.  In this clip you'll hear Lu summarize part of a sermon she heard.
I stayed in a hotel, but my four friends stayed with Dale and Joanne, a kind Christian couple in an incredibly beautiful part of Bartlesville.   All of Bartlesville seems beautiful to me, so that's saying something!
When you enter their home, one of the first things you notice is the wall in the foyer that is covered with photographs.  I mean covered.  Then you realize that the photos don't stop in the foyer, but continue on into the dining room, and kitchen.  What a great use for walls, and what a great way to remember to pray for friends!
Lu, Bonnie and I left Andy and Barb with Dale and Joanne, and headed out for a 6 PM dinner appointment with a number of other VOM reps.  But Bonnie wanted us to stop by Walmart so she could get a digital camera.  And then Lu asked her to get some Gatorade there too.  I was inwardly stressing about whether we could still make it to dinner on time.  I was driving Lu's vehicle, which is about 20 years newer than the cars I normally drive.  One of the quirks of her vehicle (perhaps true of all newer vehicles?) is that you have to put the vehicle into "park" before anyone can get out.  When the vehicle is in "drive" all of the doors are automatically locked.  So we pulled up in front of Walmart, and I put the car into park so Bonnie could get out.  She disappeared into Wally World and I prepared to drive over to the Walmart gas station to fill up.  But to my horror, I couldn't get the car out of park!  Was there some kind of glitch in this new fangled thing?  Had the computer become confused?  I turned the car off and on.  Got out and opened and closed Bonnie's door again in case there was something ajar.  Still stuck in park.  Tried praying out loud a time or too but God didn't answer (although in retrospect I'm sure He was smiling).  Vehicles were starting to pull up behind us, confused why we were stopped right in front of Walmart.  I tried to wave them on past us.

I suggested to Lu that we change seats and she try it herself.  After all, she is the vehicle's owner.  Maybe it would cooperate for her.  But she too was unable to escape the clutches of "park".  She suggested I pull out the owner's manual.  I feverishly flipped to the page that described how to get the car out of park.  (Thank goodness it was in the index.)  "Oh, it says you have to push the brake pedal!" I said.  She did, and to our amazement it worked!  Then, our amazement turned to embarrassment.  Of course you would depress the brake pedal before shifting out of park.  I had instinctively done so many times on her vehicle already on this trip.  Why had this simple fact temporarily exited both of our brains at the same time?  And in front of Walmart no less?  I later realized that God was giving me a gentle spanking for getting so worked up about "my" schedule.

Well, we had a good laugh, filled up with gas, picked up Bonnie, and still made it to the dinner on time.

Well, we made it to the dinner location on time.  But the owner of the deli where we were to have dinner didn't.  He had agreed to open his deli specifically for our group (who wouldn't for 30 people?), but somebody forgot or wrote down the wrong day and we all wound up having to go to Ocean China instead. 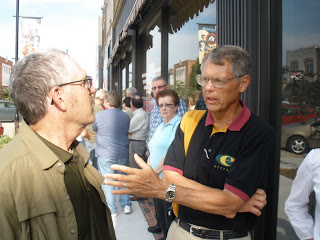 No one seemed to mind.  It was great just to see each other again, and the location was irrelevant.  But I do feel sorry for the deli owner.  Who knows, maybe he was at Walmart?
Posted by Daniel at 7:34 PM

Email ThisBlogThis!Share to TwitterShare to FacebookShare to Pinterest
Labels: VOM