The Hiding Place for Kids 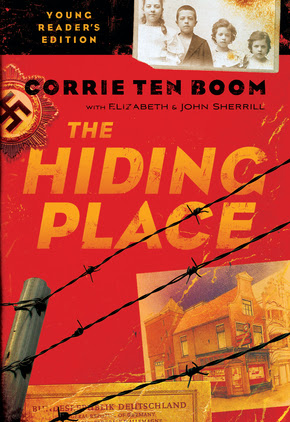 One of my favorite books is Corrie ten Boom's The Hiding Place.  Part of this is because of John and Elizabeth Sherrill's exceptional writing skills.  But mainly because of it is a faith-stretching true account of a Christian family that shone for Jesus amidst the darkness of Nazi Germany's occupation of Holland.  It is really an unforgettable story.

So when I saw that Chosen Books had released a "Young Reader's Edition" of The Hiding Place I was worried.  What were they doing, tampering with such a classic story?  Was this just an attempt to make some money by tweaking a beloved book?

Chosen Books was kind enough to send me a free copy for an unbiased review on my blog.  To my joy, this book has not mangled the beauty of the original.  Much of the book is identical to the adult version.  Some of the secondary stories (such as her mother's stroke) have been removed to make the book shorter.  And some of the harsher details of Corrie's life have been omitted, for example the foul bedpans and flying bandages in the camp "hospital" just before her release.  But thankfully while adapting to the emotional capacities of youth, it still presents the reality and brutality of the suffering she experienced: the fleas, the early morning roll calls, the brutal guards, the cold, the endless physical labor are all still there.  It also includes beautiful line art sketches (in a 50's style) to illustrate the book.

I highly recommend this version of The Hiding Place, and hope that it will whet young appetites to read the full version when they are older.
Posted by Daniel at 12:18 PM