Here's the report I sent my colleagues at the Voice of the Martyrs after this year's work at the July 22-23 homeschooling conference in Phoenix.  (Can you tell I'm behind on my blogging?)

This was our fifth year to do a VOM/Kids of Courage booth at the Arizona homeschooling convention. Every year has been different, which (in retrospect) has been wonderful because it’s forced me to depend on God Himself and not simply my past experience of God.

Once again, we got an “average” location in the exhibit hall. This year I finally figured out why. The exhibitors that rent multiple adjoining spaces rightly get preference in location picking. The single booth exhibitors get the leftovers. This makes it all the more amazing that we had such a good location for one of our years (2009).

I worried a lot that we would not have enough help at the booth. But that proved to be one advantage of a less-than-ideal booth location: traffic was never overwhelming. I’m now glad we didn’t have more help at the booth, because they would have wound up standing around and I would have felt badly.

Here is a picture of the team from Friday:

And yes, I did wear my handcuffs, and even “shackled up” with a few of the children who came by, but I had no troubles with my key this time! My orange jumpsuit did apparently get me close to being tackled by an off-duty deputy sheriff.

Bethany and Kathy (who are homeschoolers and supporters of VOM/KoC but not VVN members) helped for just a couple of hours on Friday but seemed to enjoy their time at the booth.

Bob also helped on Friday but left before our group photo. He is an elder at Mark’s church and was recruited by Mark to fill in for Mark, who was only able to help for a few hours at the convention this year.

I will say that whatever her other strengths or weaknesses as a rep might be, Bonnie was born for boothmanship. She has just the right combination of wit, moxie, and vocal volume to snatch and stop people who would walk by a less-talented booth rep.

This year (thanks to Dave asking “How are you ever going to fit all these items on your table?”) I did something that I should have thought of a long time ago. I brought 3 extra tables rather than just 1 (1 is provided with the booth). So, instead of the 28 square feet of table space we’ve used for the last 3 years, this year we had 51. We also changed the table arrangement to make the booth more “open” so that visitors could walk into it. This also gave us more under table space to stash our boxes, which meant that the booth stayed well organized. I also got rid of the chairs that come with the booth but take up valuable floor space.

This year’s convention featured Ken Ham as keynote speaker, and the attendance (4800) set a new record.

There is no question that not having the Kids of Courage newsletter (for sign up) dramatically affected the number of sign ups this year. In past years we could run a very efficient signup machine by simply asking “Have you heard of VOM?” (Most had.) “Have you heard of our kids’ newsletter?” (Most hadn’t.) “It’s free, here are samples. Do you want to get it sent to you regularly?” (Most did.) In 2008, with a bad location we got 130 sign ups. In 2009 with our best location, we got 263. In 2010 (with an average location, and diminished but partial reliance on KoC as a sign up tool) we got 145. This year (in a location about equal to last year’s) we got 58. However, I hope these sign ups will prove to be a higher quality (from HQ’s perspective) because in past years, most of our sign ups were current VOM newsletter subscribers who simply wanted to get KoC added to their subscription. The subscribers this year are (I believe) almost exclusively first time NL subscribers. So although there are much fewer, I think that as a percentage, there will be better statistics emerging from this batch than previous years’.

Our best year! In 2008, we received $600, in 2009, $556; in 2010, $464, and this year we received $970.37! (Don’t ask me where the .37 came from!) We ran out of all of the Torchlighter DVDs and could probably have easily have moved 50% more if we had had more. That was despite the fact that the very large YWAM booth was nearby and was offering the Torchlighters at essentially the same price. The large hardback children’s story books were also very popular. People took 22 of the 27 we had on the table. Both copies of Foxe also were taken. The “Illegal” T-shirts remain very popular (I ordered 13 from HQ and all but 2 were taken) while the “Criminal” T-shirts barely were noticed. (I think the red in the Illegals makes them more attractive?) I am thankful to the Lord for the good interest in VOM products – which at least covered the cost of our booth – but know that the ultimate value of the booth remains the newsletter sign ups and the personal conversations we are able to have with visitors. Which leads me to my next topic.

We did have some great visits.

Perhaps the most encouraging was a (now) 16 year old girl who had picked up Extreme Devotion from our booth 4 years ago. It had a major impact on her life, developing a passion for evangelism in her. She’s already been through Evangelism Explosion and enjoys witnessing to her neighbors.

Another woman told how she had gotten a copy of Hearts of Fire several years ago at our booth, and had put it on the shelf. She finally read it this year and was greatly touched by it.

A young Laotian couple, Edwin and Anna Lo, came by. Edwin was raised a Mormon and got saved about 5 years ago. They are passionate about evangelism (and actually met each other while they were evangelizing). They heard about VOM through Way of the Master.

We also got 9 greeting cards filled with encouraging short notes for prisoners. (Sample below.) The cover of the cards have a Kincade painting, which hopefully will brighten their cells a little. We made a special effort to tell people about PrisonerAlert.com. Several visitors knew of Asia Bibi because of VOM’s recently-launched CallForMercy.com. 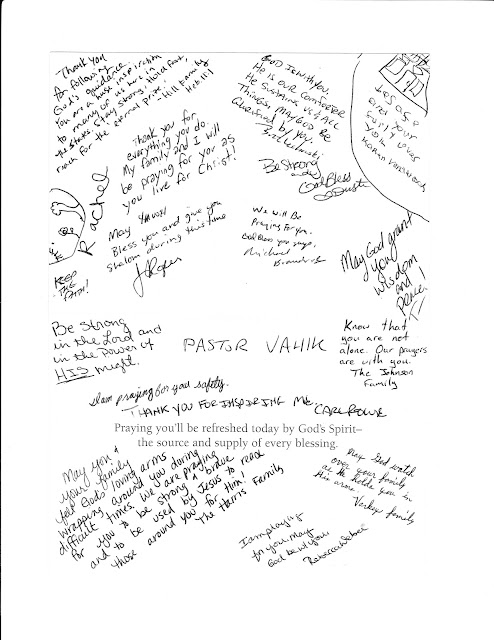 One last interesting story. On the Sunday before the convention (July 17) my pastor was out of town and we had a guest pastor fill in. The visiting pastor brought a man from his congregation along with him. This man’s name was Dan. When I talked with Dan, I learned that although he lives in a small, rural town, he is actually a pilot for United who does only international flights. In fact, on Tuesday he was leaving for London.

Now, fast forward to Friday. When Kathy arrived at our booth, she happened to mention that her husband is a pilot for US Air. I told her, “That’s interesting, I just met another Christian pilot on Sunday.” Later her husband (who had flown in from Denver that morning) came by the booth and I got to meet him. His name is Danny and he does only domestic flights. Even though he “lives” in Phoenix he actually keeps himself on Eastern time to try to prevent jetlag.

Then I was walking around the exhibit hall and who should I see but Dan! It turns out that Dan homeschools also (and was back from London!). Well, to make a long story short, I was eventually able to get Dan and Danny together to meet each other, and their wives (Kathy and Cathy) got to meet each other also! I think that the last time that I met a Christian pilot was in 2004, and here were 2 in one week!

Thank You, Father, for the privilege of working at this convention the past five years. Water the seeds that have been planted; bless Your Word to the hearts of Your people, both here and in the dark places of the world. For the honor of Your crucified and risen Son. Amen.
Posted by Daniel at 2:06 PM